I'll tell you a story
Of rough and tough Saul
Who fought against God
And was sure to fall,
Till God spoke to him,
And he became Paul. 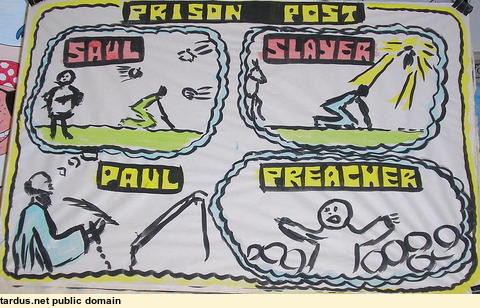 An old man is in prison in Rome

An old man is in prison in Rome, capital of the mighty Roman Empire, chained to guards all day. For doing awful things? No, for doing good things! In prison, he thinks of all that has happened, and writes letters (which we still have, in the Bible!) This man was named PAUL. Acts 28:30,31 (i.e., chapter 28, verses 30 and 31)

His name was SAUL

His name was SAUL when he was a young man. He thought that he knew what pleased God, and knew the first part of the Bible (what we call the "Old Testament") inside out. Knowing God's Word is a good thing, but it led Saul to murder, for he didn't really understand it.

He hated the followers of Jesus

He hated the followers of Jesus ("How can this nobody from a country village be God's promised Son? It's all a cheat!"). He led men with weapons to break into the homes of Christians and dragged them to prison. He voted "YES!" for them to be stoned to death with great big rocks, and watched while it was done.

There are more Christians in the far off city of Damascus!

"There are more Christians in the far off city of Damascus!" Saul got a warrant to arrest them and set off on horseback with some other men.

As they came near to Damascus, suddenly a bright light shone around him, and he fell to the ground, stunned. A voice called out "Saul, Saul, why are you hurting me?" "Who are you Lord?" Saul said. "I am Jesus, whom you are hurting!" Acts chapter 9

Saul was blind! He could no longer see. His men led him into the city, and for 3 days he did not eat or drink, just thought and prayed. "How wrong I've been! Jesus is the promised Son of God. He is alive and is the Lord! I'm no better than a murderer"

Jesus told Ananias, a Christian in the city (one of those Saul had come to arrest), to go to Saul and speak to him. "Him Lord!?" "Yes, for he is now my servant, to tell of me to all the nations.".

Ananias finds him, and says "Brother Saul, Jesus has sent me so that you may see again." Saul was forgiven! He became a new man. (See how Ananias , straight away, calls him "brother", not "slayer"). Acts 9:17

After eating and drinking

After eating and drinking , right away he began to tell everyone he could that Jesus is God's mighty Son, the promised One who was to come and rescue sinners like us.

SAUL the SLAYER had become PAUL the PREACHER. That is why he ended up in prison many times, and at last in Rome.

Have you seen what Paul saw?