By hook or by crook
I'll be Captain Book!
I'll tell of Skull Hill,
A place for the dying,
Where Jesus my Lord
Went up as my King. 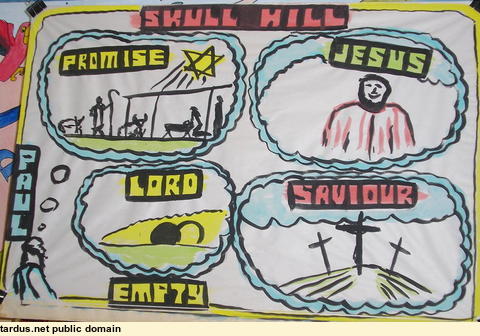 PAUL in a Roman prison

Paul is in prison and thinks back over all that has gone before, and of how he discovered the greatest treasure in the world.

God had long been repeating the PROMISE

God's promise was that Someone would come who would set things right (for all had gone wrong when our ancestors Adam and Eve turned away from God).

At last the day came.

Jesus was born to ordinary people in an ordinary village, and in a shed at the back of the local hotel. Angels sang, and shepherds and wise men came to see and worship Him.

..but never did anything wrong and horrible like we do.

At 30 years of age he picked 12 followers to help him ("disciples" because they learned from Him, "apostles" because they were sent out by Him). He began to visit all the towns of Israel, healing the sick, comforting those troubled by the devil and preaching the best of news, truly Good News ("Gospel" means "good news"), that God's promised One had come. Even dead people were restored to life by Jesus.

After 3 years Jesus was betrayed

He was betrayed by Judas, one of the 12 apostles (God is showing us that a man who looks the best of men on the outside can be rotten on the inside).

He was lied about by his own countrymen, and condemned to a cruel death by the Romans. To be nailed to a cross and left to die was only thought fit for criminals and runaway slaves.

They did this at the place of the SKULL. 2 real criminals were executed either side of Him. Luke 23:42,43. His own countrymen and the Romans poked fun at Him as He hung dying. "If he is God's Son, let him save himself!" Ah, but if He had, He could not then save us! The sin-less Son of God died so that sin-full US can be forgiven, so He could be our SAVIOUR.

He was a dead Saviour, but now is a living Saviour! The place of DEATH has become the place of LIFE. Is He your Saviour and your King?