I'll tell of a dungeon
As dark as the night;
But God came to visit
And then there was LIGHT. 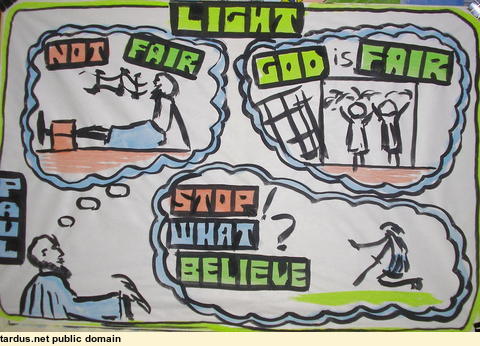 PAUL remembers his time in Philippi

... the time that he and his friend Silas went to the Roman town of Philippi, and ended up in prison there. Acts chapter 16

They used to go each day to the riverside

... where they prayed. Each day they passed a slave-girl who was an unwilling witch. An evil spirit whispered to her and made her into a lying fortune teller, and her owners made lots of money. That was NOT FAIR.

But God is in control; the slave girl cried out each day "These men are servants of the Most High God, and have come to show you the way of salvation!" not servants of the make-believe little gods of the Romans, but of the true and only God. even evil spirits must honour Jesus, though they hate Him

Paul orders the evil spirit to leave her, and it does! Her owners are angry ("no more money!") and stir up a mob who drag Paul and Silas to the magistrates. They are flogged without any trial and the gaoler told to keep them safe, "or else!". He throws them in the inner dungeon and locks their feet into heavy wooden stocks, so that they cannot move nor rest. That was NOT FAIR either. But they sang and praised God anyway, and the other prisoners heard them.

We love it to be fair

We cry out "not fair!" soon enough. But are you fair all the time? "Share these lollies with your sister" but instead you eat the lot. "Jimmy did it!" but you know he didn't. "You took my bike without asking and now its broken!".

Now, GOD is FAIR. He sends an earthquake and the doors fly open, and the chains fall off. No ordinary earthquake! Other prisoners don't try to escape. It would not be fair to let criminals out. God makes sure that no one "gets away with it". But God does free Paul and Silas, who had done nothing wrong. That is fair!

The gaoler is jolted awake

... and sees the doors open. "They have all escaped!" he thinks, and takes his own sword to kill himself (Roman law was to kill a guard who lost his prisoners). Paul shouts out "STOP, don't hurt yourself!" See how Paul cares more for his gaoler than the gaoler ever did for him.

The gaoler calls for LIGHT, and comes in, trembling and terrified. "WHAT must I do to be saved?" he asks. Perhaps he had heard what the slave-girl had cried out. He knew he had done many wrong things (that's what sin is), and that the true God was great and FAIR.

Do you know that you are a sinner too? Have you asked "What must I do to be saved?"

"BELIEVE in the Lord Jesus and you will be saved" Acts 16:31. Jesus took my punishment, so that I won't have to be punished. I must just trust in Him. Have you?

Have you found the true LIGHT?