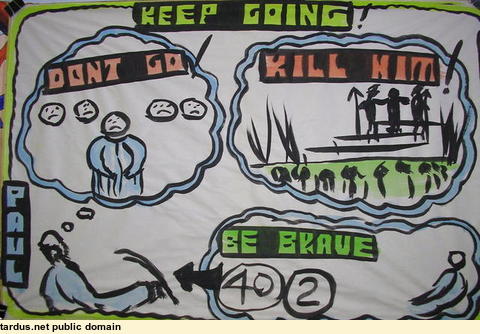 PAUL in the Roman prison

... thinks back on a time when he could have given up, but didn't.

He was on his way back to Jerusalem

Along the way friends said to him, again and again, "DON'T GO!". Acts 21:4. While he stayed at his friend Philip's house a prophet, Agabus, arrived from the region of Jerusalem. He did a strange thing; he picked up Paul's belt and tied his own hands and feet with it, saying "the man who owns this belt will be tied up at Jerusalem." Acts 21:11. Friends said again "DON'T GO!".

... "What are you doing, weeping and breaking my heart? For I am ready not only to be imprisoned but even to die in Jerusalem for the name of the Lord Jesus." Acts 21:13

This is the same thing he wrote in his letter back to the Christians at Philippi (yesterdays' story). "For to me to live is Christ, and to die is gain." Philippians 1:21.

Paul goes onward to Jerusalem. Paul was at Jerusalem for a few days, living quietly and doing no one any harm.

But one day some enemies...

... who hated Jesus and Paul's preaching about Him saw Paul. They stirred up a mob which turned into a riot as they tried to beat Paul to death. Seeing the riot, the chief Roman officer ran down with soldiers and pulled Paul out of the murderous mob, thinking he must be a great trouble-maker. The soldiers chained him, and had to carry him over their heads to the castle, because the mob was so wild. Paul tried to speak to the mob, but they would not listen for long, and shouted "Away with such a fellow from the earth! For he should not be allowed to live." The mob was out of control.

Paul rescued? Not quite!

... Roman officer said "Flog him, till he tells us what this rioting is really about!" As they were about to whip him, Paul said "Is it right to whip a Roman citizen without a trial?" for Paul was a Roman citizen. So the Romans treated him kindly, and kept him safe (just as God had planned).

2 days later, after another near riot, the Lord Jesus came to Paul at night, to tell him to "BE BRAVE" Acts 23:11 "Take courage, for as you have testified to the facts about me in Jerusalem, so you must testify also in Rome"

... 40 men promise never to eat nor drink until they have killed Paul. They plan to trick the Roman officer into bringing Paul out for a trial, but will kill him then. Paul's young nephew hears about it and tells the Roman officer, who sends Paul that night to a safe city, with an escort of hundreds of soldiers. God is keeping Paul safe.

Paul is under arrest for 2 years, without a fair trial. But he is able to tell the good news about the Lord Jesus to the Jewish king and 2 Roman Governors. God is at work through Paul. Paul asks to be judged before the Roman Emperor. Jesus had said Paul was to speak of him at Rome; now God will take him there.

Keep going, all you who have trusted in Jesus! "I press on toward the goal for the prize of the upward call of God in Christ Jesus." Philippians 3:14. "I have fought the fight. I have finished the race, I have kept the faith. Henceforth there is laid up for me the crown of righteousness, which the Lord, the righteous judge, will award to me on that Day, and not only to me, but also to all who have loved his appearing." 2 Timothy 4:7,8