By hook or by crook,
I'll be Captain Book!

I'll tell of a wizard
Who thought he was great.
He bad-mouthed the Gospel,
It made him irate.
So God made him blind,
And showed him the gate! 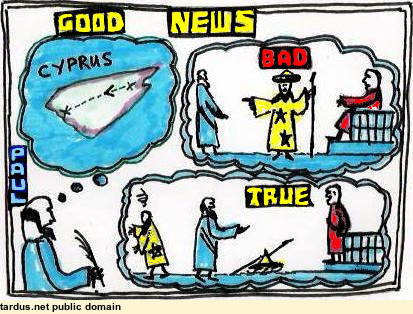 ... in Rome thinks back over his first missionary trip, to the island of Cyprus, in the Mediterranean Sea. He went with his friend Barnabas, who was a native of Cyprus. Acts 13:4-6

They landed at the port

... city of Salamis on the east coast of the island, and journeyed across to Paphos on the west side. As they went they told the NEWS about Jesus to everyone they could. This was very GOOD news! God had sent a sin-less Saviour who gave His life so that sin-full people like us can be forgiven. And not only that, this Saviour, Jesus, is alive again, as King and Protector for all who trust in him.

... of the island, Sergius Paulus, an intelligent and thoughtful man, summoned them, for he very much wanted to hear God's word from them (this shows just how intelligent he was; many people show their foolishness by NOT wanting to hear God's word). Sergius wanted to know the truth - do you? How can a man be alive after a Roman execution? The Romans were very careful in such things. If they said He was dead, He was dead! Acts 13:7

There is nearly always a "but" somewhere! There was a magician named Elymas in the Governor's court. He thought it was BAD NEWS. Elymas was a sorcerer, He was proud and loved to be called "Great One!" He loved his power over the people. "If the Governor believes these Christians, he won't believe me any more!"

... opposed Paul and Barnabas, and tried to stop Sergius the Governor from listening to their message. Acts 13:8

Paul would not put up with this. Sergius wants to here the truth, and he will! Paul, filled with the power of God's Holy Spirit, looked Elymas right in the eye and said "You son of the devil, you enemy of all righteousness, full of all deceit and villainy, will you not stop making crooked the straight paths of the Lord? And now, behold, the hand of the Lord is upon you, and you will be blind and unable to see the sun for a time." Acts 13:9-11

Immediately mist and darkness fell upon him

Then Sergius the Governor believed in Jesus too.

Do you believe like Sergius did? If not, will you?