A Tribute to Anne Frank 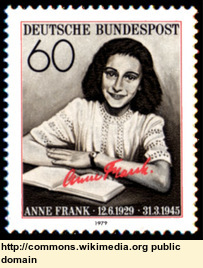 I remember, about 20 years ago, watching on old movie based on Anne Frank's diary. It made a strong impression on me, with its pathos of 8 Jewish people in hiding for 2 years in Nazi-occupied Holland and their eventual betrayal to the Gestapo. The pathos is all the greater because the Allied invasion of Nazi-occupied Europe was well underway when they were betrayed, and their hope of liberation was high.

While on holiday this last couple of weeks we found a secondhand copy of "The Diary of Anne Frank" in an op-shop, and I have just read it with delight. A sombre sort of delight admittedly because of the setting, and the knowledge that this remarkable 13 year old girl would die at 15 in Belsen. The only one of the 8 to survive those 2 years in their "Secret Annexe" was Anne's father, Otto.

I know it is a cliche, but everyone should read this book. The detail of how they survived as long as they did without ever leaving the hiding place is fascinating, but it is not for that reason it deserves to be read. Rather because Anne tells us so much about the beauty and dignity of our humankind as well as the ugliness and evil of that same humankind. All this from a 13 year old in fear of her life under the most cruel and ugly regime that ever blighted the Earth. She writes with such honesty and fairness when she could have been bitter, choosing rather to find beauty where she could, in herself as well as in others. She realised that we are all made from the same miry clay.

She wrote "I want to go o living after my death. And therefore I am grateful to God for giving me this gift ... of expressing all that is in me." If in no other way, in this small (220 page) book her wish is fulfilled.

Her optimism, her spark of genius, her faith, shine through her words.

What do I make of all this?

Where was God in all this?

Is He just a God above, disconnected from this poor, broken Earth, without any care for justice, without any intervention?

Are we left below with nothing but the might-is-right philosophy of vicious men?

I think that the only answer is Jesus, Immanuel (which means "God with us"). Here only is the God who did intervene in human history. Here is the God who shows His care for us all, by His life as the "man of sorrows and familiar with suffering", by His death for us, and by His ultimate victory over death, the great enemy. I've written on this at greater length in The Problem of Pain.

Here only I find real, solid hope, for the Annes of this world, and for myself..

'54 When this body that decays is changed into a body that cannot decay, and this mortal body is changed into a body that will live forever, then the teaching of Scripture will come true: "Death is turned into victory! 55 Death, where is your victory? Death, where is your sting?" 56 Sin gives death its sting, and God's standards give sin its power. 57 Thank God that he gives us the victory through our Lord Jesus Christ. ' - NIV Bible, Paul's 1st letter to the Corinthians, chapter 15.