Yet another budding hobby! I saw this little engine and trucks in the window of a shop in Ariah Park, in the wheat and sheep farmland of the Riverina, in south-western NSW. The shop window had a sign saying "We buy junk and sell antiques". It cost me more than junk, but less than antique.

I like this little engine because it has a realistic look about it. Not obviously plastic, metal wire handrails, nicely weathered look. 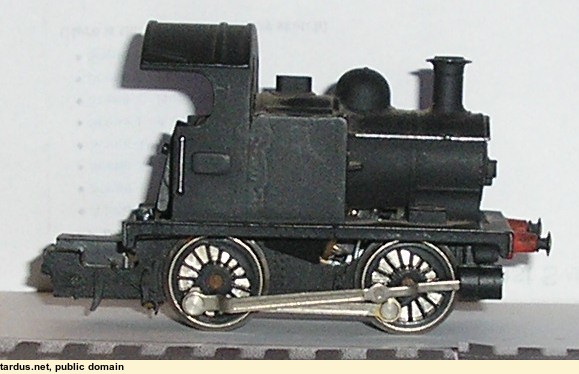 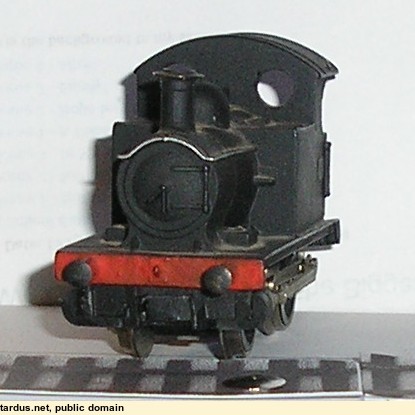 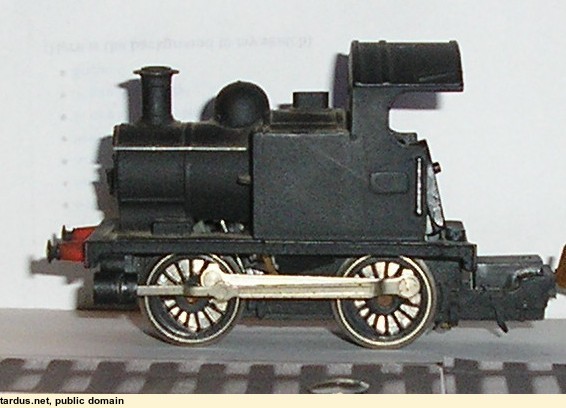 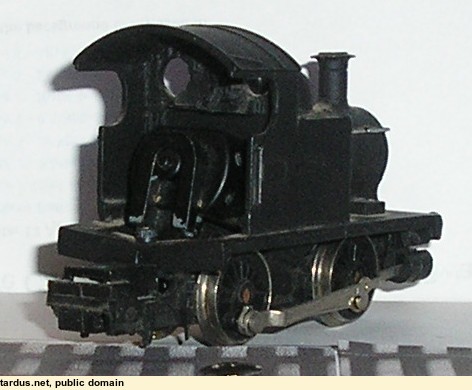 I have not been able to identify it, except that it was by Hornby with "Made in Great Britain" embossed on the bottom. It has a plastic chassis. It has no coal bunker, no rear buffers and no front or rear couplings (though there are odd marks on the front, so a coupling may have been broken/cut off). I wonder whether the engine had some sort of attached bunker/trailing wheels, perhaps making it an 0-4-2. If anyone has a clue what this engine is, I'd like to hear from you

When I tried it out on a length of new track, it would barely go, which was a worry. However, a lubrication service (paper-clip dipped in WD40, applied to axle bearings and worm-wheel)) and cleaning the wheel contact surfaces with a wire-brush in my Dremel tool transformed it. It now runs slowly and smoothly on just 6 volts DC, fit for shunting service. I expect an electronic pulse-width modulated controller will enable it to run very slowly, as is fitting on a micro-layout.

I came across Carl Arendt's wonderful micro-layouts web site https://www.carendt.com a year or so back, and it re-kindled an old teenage interest in miniature trains. I was especially fascinated then by layouts with lots of scenery, tunnels, etc, enclosed in tiny spaces. Carl defines "micro" as anything less than 4 square feet in size, and many on his site are much smaller than that - little working micro-worlds!

I had in mind "Endal Street" as a layout, by Jon ''Song&oslash;ygard '' #dual; on doing some sketching, it seemed that the OO scale little Hornby would just be too big to fit in a shoebox. As Ariah Park is the first place in NSW to use bulk-handling of wheat, back in 1916, and has a magnificent grain elevator and silos, I hope to remodel Endal Street as "Ariah Park", an a lavish A3 size baseboard. That is 430mm x 295mm, or 17 inches x 12 inches. That is just 1.4 square feet, just 34% of Carl's micro limit. 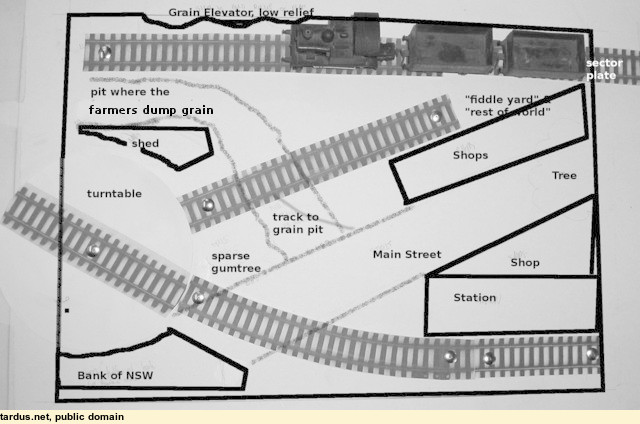 It won't be very close to Ariah Park, as the old station and the other buildings I plan to include have been moved around a bit, compared to their real locations, but I hope to keep something of the atmosphere of this quiet country town in its busy farming community.

My layout idea uses the removable sector plate and turntable from Endal Street, with a flat or low-relief background for the grain elevator. The buildings in front of the sector plate will be high enough to hide the sector, allowing it to be used as a "fiddle yard", where a Giant Hand can remove, rearrange and insert engines and trucks. It becomes a hidden "rest of the world", where loaded wheat trucks go to, and empties arrive from. In addition, the occasional passenger and goods service can run through the turntable to the station. It could include a rail-bus. Not so unlikely, as one of the early NSW rail-buses did run to nearby Harden from 1937 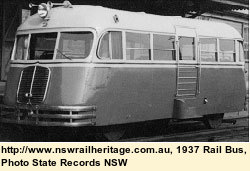 Possible modifications to the locomotive

Here is a mark-up of one of the photos, with a small coal bunker (probably too small to be practical, but looks better than nothing), hooks front and rear for the couplings (simple loop-link couplings, to hook over the horns on the Trix TTR wagons I plan to use as rolling stock) and some rear buffers. Also, cut off part of the protruding rear chassis. 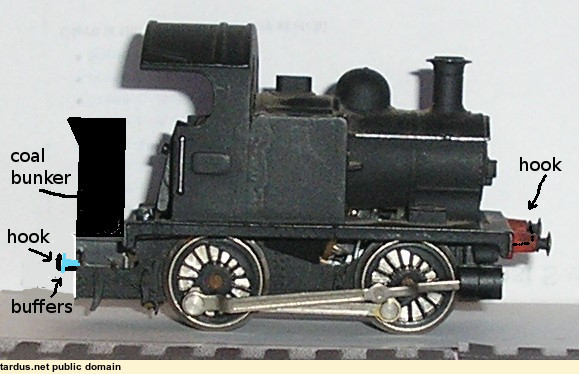