The Biggest Swap Ever 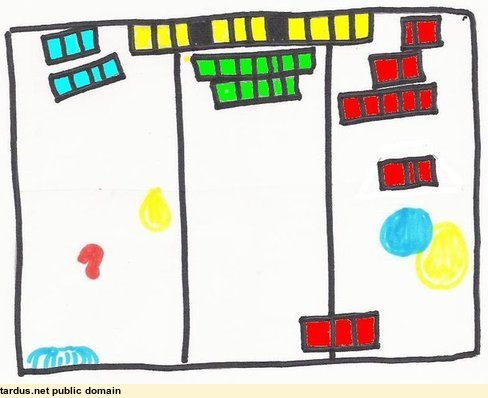 Today's story from the Bible is about a big swap. Have you ever swapped something, like swapping a bike for a skateboard, or a piece of clothing with a friend? 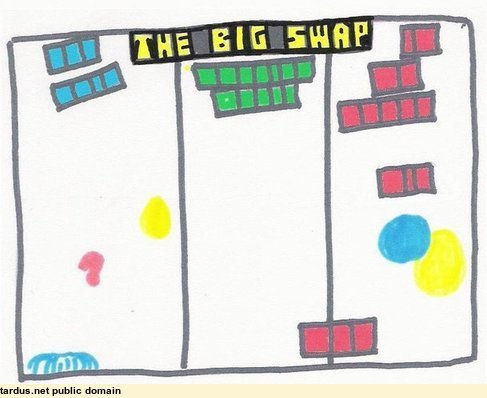 Swapping takes place in team sports too, like football or netball, but they call it "sending on a SUBSTITUTE", to take the place of an injured player. God sent on the greatest SUBSTITUTE ever, for you and me. (Luke's Gospel, chapter 22, verses 47 to 63, and chapter 23 too)

The same story is in Matthew, Mark and John's Gospels too, in the Bible.

This is a true story that happened over 50 years ago. A smallish boy, who wore glasses and was a bit of a nerd, was standing in the school playground with some other boys his age, when one of the really big older boys came up. Without warning, the bigger boy punched the smaller one as hard in the stomach as he could. That was NOT FAIR! The small boy doubled up in agony, and clutched at the big boy as he fell, so that both rolled on the ground.

Just then, a teacher came along and saw them. "You two! You know fighting is against the rules - off to my office now!" The teacher didn't believe what had happened, and punished both boys, which in those days was "6 of the best" each. 6 hard whacks with a stick over the fingers of their open hands, and it really stung. That was even more NOT FAIR, and the smaller boy shed bitter, angry, choking tears. 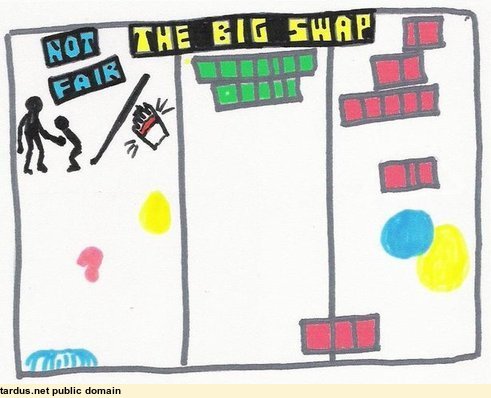 I know its true, because I was the smaller boy!

There is another true story that is much more "NOT FAIR!" Jesus was the best man that ever lived on Earth. He never did any wrong. He went about doing good, healing people of many awful sicknesses, and telling the good news that God's promised King, Who would fix all wrong in the world, had come at last.

The leaders of the people should have been glad at such good news, but they weren't. They hated Jesus. "We won't have this king to rule over us!" they said (Luke 19, verse 14). They hated Him because he was popular with the common people. They hated Him because he showed them up as pretending to please God when they were really greedy for money and power over the people. They would rather have the Romans than Jesus! They even plotted how they could kill Jesus. (Luke 22, verse 2) 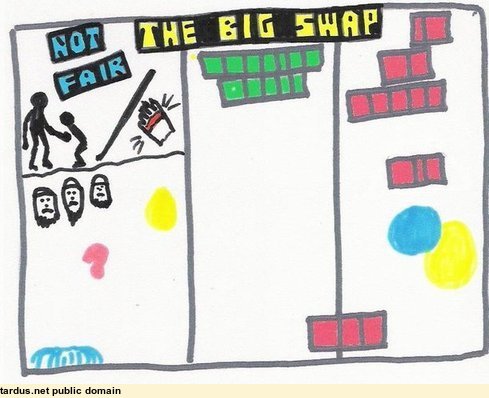 But the leaders were afraid of the people - "If we arrest Him, the people will be angry, and riot, and the Romans will take our jobs away and rule by force."

Now the next NOT FAIR thing happened. One of Jesus's 12 disciples, one of His closest friends, went to the leaders, and said "How much will you give me if I lead you to Him when no one is looking?" They gave the traitor, whose name was Judas, 30 pieces of silver (about $10,000). He knew a lonely garden where Jesus often went to pray at night. "That's it! The man I greet as a friend will be Jesus - grab Him then!" 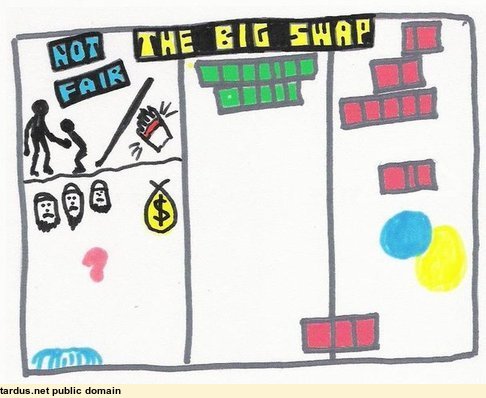 One night, while Jesus was praying in the garden, there came the sound of voices and footsteps coming near, and the flicker of lamps on shiny steel. A mob of men with swords and clubs and ropes surrounded Jesus. 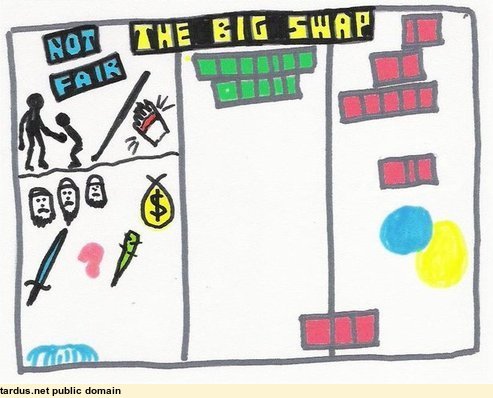 Judas appeared, and went up to Jesus, greeting Him as a friend (Luke tells us he kissed Jesus - it was common then for a man to kiss another on the cheek as a sign of friendship, much as we shake hands today). The mob closed in on Jesus.

"Jesus, quick! Call an army of angels to rescue you!" But He would not. He said to the mob, "Who do you want?". "Jesus" they said. "That's me" He answered, and they all fell to the ground terrified. Jesus said the same thing again, going forward to them, giving himself to them.

Peter, one of Jesus' friends, pulled out a sword and swung wildly with it, cutting of a man's right ear! "Stop!" said Jesus, and touching the man, healed his bleeding head instantly. 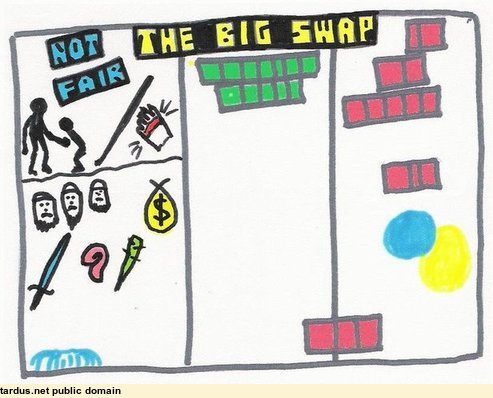 Then the mob tied Him up and laughed at Him, and led Him off to the leaders. 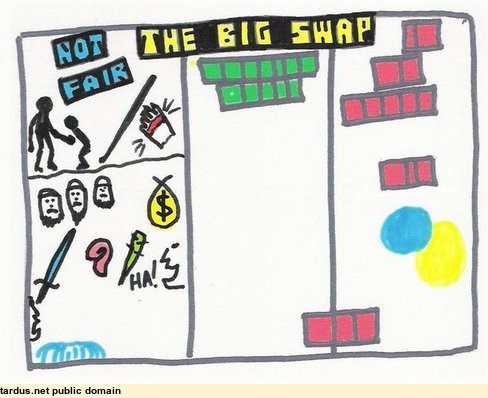 The leaders blind-folded him, beat Him up, and laughed at Him "Na! Na! Na! - if you are God's son, tell us who hit you!". But they could not kill him - only the Romans could do that, so they made up lies about Him, and dragged Him to the Roman Governor. The Governor listened to their lies, knew them to be lies, and told everyone, "This man has done nothing wrong".

The Governor, Pilate, sent him to Herod, whom the Romans had made a puppet-king. Herod laughed at Jesus, and sent Him back to Pilate - "He's done nothing wrong."

The leaders stirred up their mob crying out "Kill Him!". The Governor said "Why, what has he done wrong?". The mob yelled for blood saying "Jesus wants to be king - Caesar, the Roman King, is our only king!" The Governor got worried ("I'll lose my job if Caesar hears this, maybe lose my head!"), and said, "OK, let him be killed". 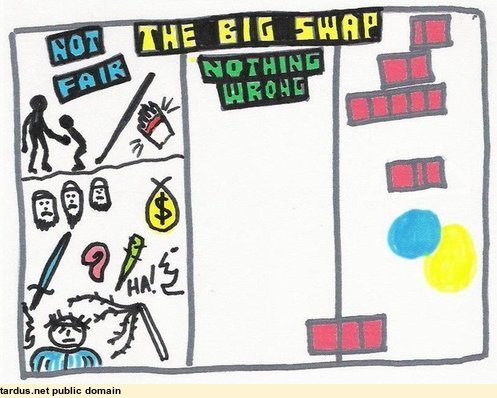 The Roman soldiers flogged Jesus with a many tailed whip with bits of bone stuck in it, until His back was slashed and bleeding. They made a crown of razor sharp thorns and jammed it on His head, so the blood ran down his face. Then they made fun of Him, bowing down and saying "Long live your Majesty!"

The soldiers then marched Him away to be killed, and He had to carry a big, rough, wooden cross.

It was all so horrible and so UNFAIR. 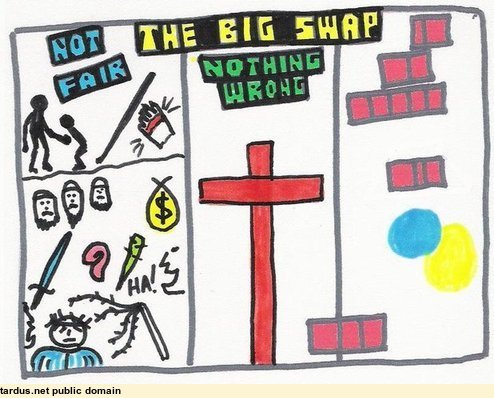 When Jesus could carry the cross no further, the Roman soldiers grabbed a man from the crowd and made him carry the cross out of the city, to a hill where they used to kill criminals.

The soldiers stripped off Jesus' clothes, pushed Him on to the cross and hammered big nails through His hands and feet. They lifted the cross with Jesus and jammed it into a hole in the ground, leaving Him to hang for hours in agony. They called this cruel killing "crucifixion". 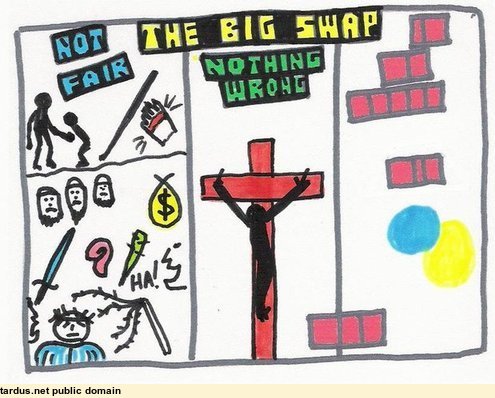 It became dark at midday - even the sky hung its head in sorrow. Then in the afternoon, Jesus cried out in a loud voice and died. 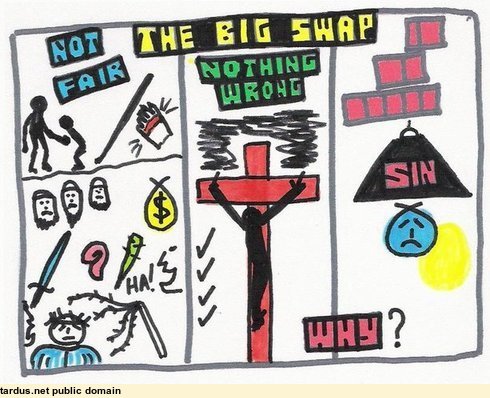 It is as if there hangs over every one of us, over you, and over me, a huge block of iron, very heavy, and held only by a thin string. Any time it may break, and we will be crushed. It is called SIN, and is made of all the bad things we have done, the bad words we have said, and the bad thoughts we have had. Its made of the things we are ashamed of, and would rather die than have our friends know. Our stealing, lying, cheating, hating, hurting, name-calling. All our NOT FAIR things.

God is FAIR, and must punish all our sins. He would not be fair if He did not. 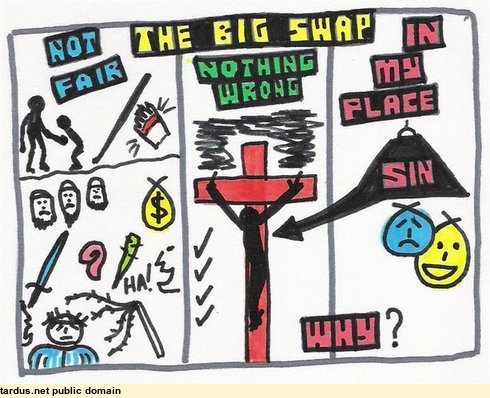 But God is LOVE too. That is WHY Jesus, God's Son, gave His life IN MY PLACE. He did it out of love for me, and for you. The enormous weight of my sin fell on Him, and He was crushed to death for me. Will you say "and for me!"

"God loved the world so much that he gave his only Son, so that everyone who trusts in him will have eternal life." John's Gospel, chapter 3, verse 16

"But God demonstrates (shows) his love for us in this: while we were still sinners, Christ (Jesus) died for us." Romans, chapter 5, verse 8

In this story, there is no "Do What He Tells You". Jesus does not say anything to us. All the DO-ing was His, His dying love.

Will you trust Him, to take away your sins, and lead you on to better life and your true home with Him?

Click here for a download-able PDF copy - or go to the web-site https://tardus.net, click on "Story", then "ChampionsChallenge"