The Empty Tomb (From Sad to Glad) 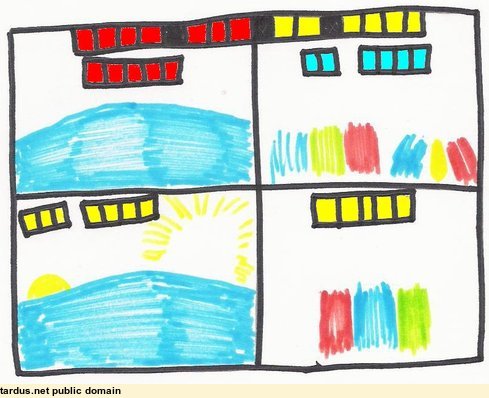 Today's story from the Bible is the happy ending to a very sad story. In fact, it is the happiest of endings, to the very saddest of stories. (Luke's Gospel, chapter 24, and also the last chapter of Matthew, Mark and John's Gospels - they all tell the same story, though each brings out some things the others did not mention.)

Many graves have a headstone, or tombstone, to mark the grave and tell us who is buried there. But the stone on Jesus' grave was there for quite another reason. After Jesus died on the Roman cross, one of the Roman soldiers stabbed Jesus' body in the side with his spear, and out came blood mixed with water - a sure sign that he had been long dead. His cold body was taken down and put in a borrowed tomb - that is, a grave like a cave, cut out of solid rock. It was unused, and nearby, and probably the body would have been moved after the weekend. 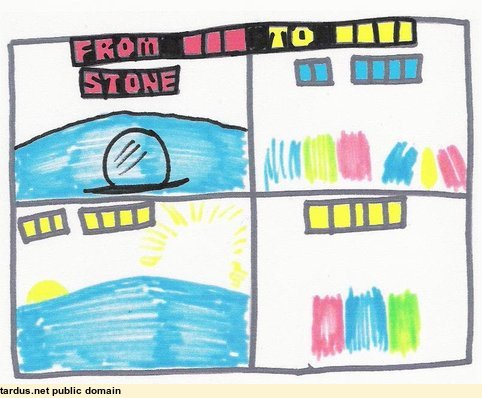 A big round stone, as big as a door, was rolled down a sloping groove to seal the entrance to the tomb. It was there to keep the body safe from wild dogs and other scavengers. But God allowed it to be there for another reason. It was to prove that no one had come and taken away Jesus' dead body. There were not going to be any tricks. All the world must know that He had really and truly died.

God controls even the bad deeds of bad men, to work out His own good end. The leaders are worried - "This liar said he would come back to life!". They went to the Roman Governor and begged him to let them put a seal on the stone, and set guards. "If his friends try any tricks, like stealing the body and pretending he has come back to life, this will stop them." The Romans would have their heads off if they tampered with the Roman seal. 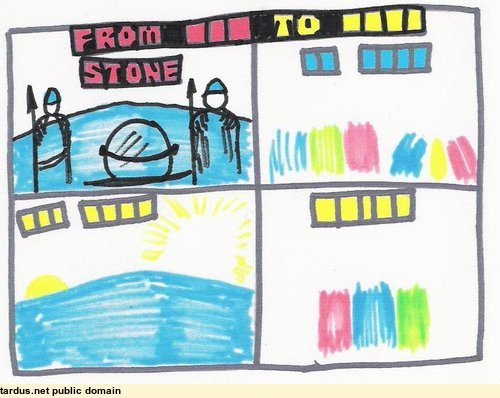 Jesus' friends were as sad as you can be. Utterly miserable, and with NO HOPE left. "We had hoped that he was the one going to redeem Israel" Luke 24:21. The men said "What's the use of anything now?" He had been their best friend and all their hope. 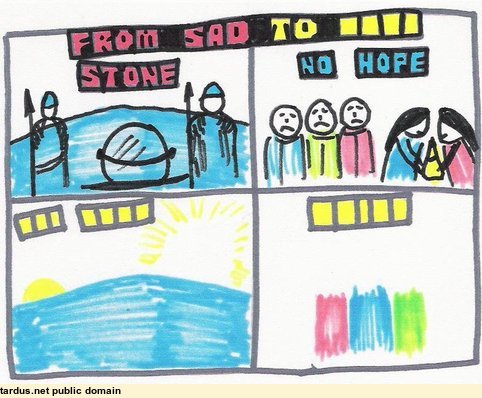 Well, God bless the women-folk. They were just as sad, but work has to be done, even gloomy and sorrowful work, so they got ready a large amount of spices and oils to wash and anoint Jesus' poor dead body. "He shall have a decent burial" They waited all day Saturday, which was the Jewish special day of complete rest, then early on Sunday morning, as soon as it was light enough to see, they set off sadly to walk to the tomb.

Suddenly one of the women said "Oh, we'll never be able to move the stone aside to get in!" It was far too big for them to lift. How many of us would have given up there and then, and trudged back home? But they kept going anyway. 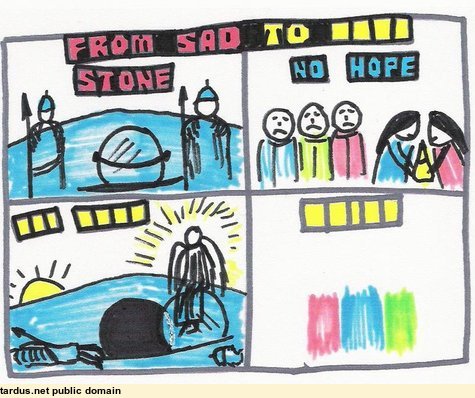 As they came near to the graveyard in the dim, early light (brave women!) they were startled by a loud rumble and a blaze of brilliant light. They could hardly believe their eyes! The big stone had been rolled aside, and an angel in dazzling clothes was sitting on it! The guards were terrified at the sight of the angel and fainted on the spot. The way was clear now. No stone! No guards! (Matthew 28:2 to 4)

One of the women looked inside the tomb. She was stunned - there was no dead body at all, just the burial clothes neatly folded. And then she saw a second shining angel. She and the others were overcome with fright. The angel said to them "Why do you seek the living among the dead? He is NOT HERE, but has risen. Remember how He told you ... the Son of Man must be delivered into the hands of sinful men, and be crucified and on the third day rise." (Luke 24:5 to 7) Then they remembered, and ran like mad to tell the others. 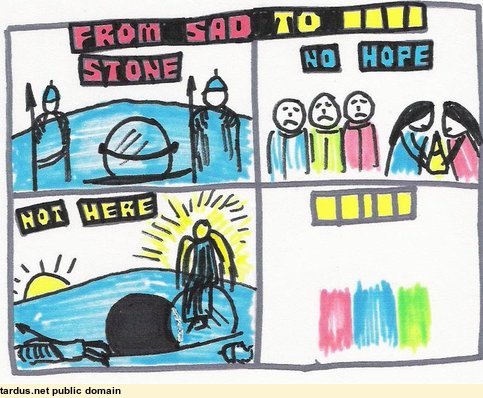 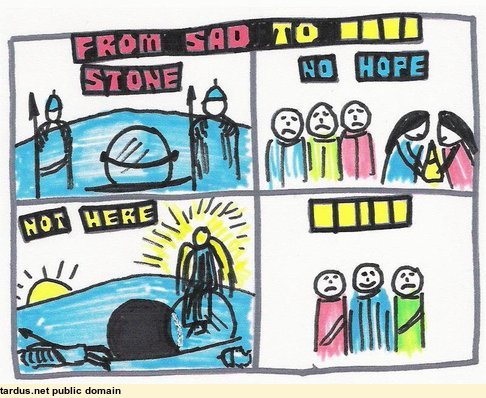 That very day, two of the disciples (Jesus' friends) were walking along a country road not far from the city of Jerusalem, where Jesus had been killed. They were so sad. A stranger caught up with them and asked why they were so sad, and they told him about Jesus, and all their grief and shattered hopes. The stranger laughed gently at them, and told them they should have expected it. He told them that all the older part of the Bible (what we call the "Old Testament", which was all of the Bible they then had) said this would happen. He told them that God allowed it to happen, and that the third day, Jesus, the Son of Man and Son of God, the promised King and Saviour, would spring back to life again. As they listened, they saw that it was all true. They wanted to hear more and asked the stranger to come and eat with them. As they sat down, they suddenly saw that it was Jesus Himself. He vanished! 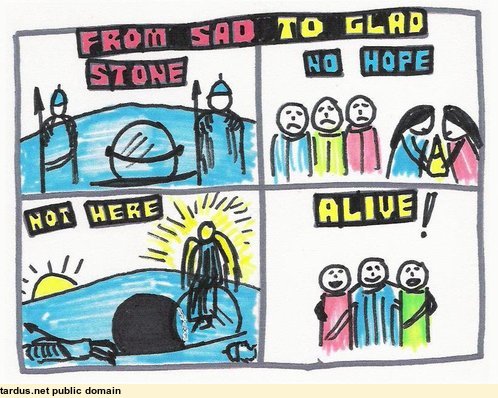 They ran back to back to Jerusalem to tell the others "He's ALIVE!", and when they got there, Jesus appeared before them all. "I'm not a ghost" He said, and had them touch Him, and ate a meal with them. Then they were filled with GLADNESS). No wonder they told everyone they met that Jesus was no longer a dead friend, but a living Saviour. He IS able to forgive all our badness, and keep us safe through all the hard parts of life, until He comes to take us home at last.

Jesus said "I am the resurrection and the life. Whoever believes in me will live, even though he dies" John 11:25

Will you trust Him to be your Forgiver, and your Living Saviour? He IS your only HOPE. Oh, why be punished for your own bad things, and be thrown into endless darkness and sadness, when Jesus the Saviour calls you now. Trust in Him, and do not delay. There is no other way to be SAFE, and no other way to be truly HAPPY

(There are sad times on the Christian road, following Jesus, but they are like the rough waves that trouble the sea at times. Deeper down, all is calm and peaceful, and that deeper happiness grows day by day, until it is made complete, perfect, on the day when an angel comes to carry you to Jesus. Trust Him, be patient, for He knows all about your troubles. "Let us fix our eyes on Jesus, the author and perfecter of our faith, who for the JOY set before Him endured the cross, scorning its shame, and sat down at the right hand of the throne of God." Hebrews 12:2)

Click here for a download-able PDF copy - or go to the web-site https://tardus.net, click on "Story", then "ChampionsChallenge"