From the beginning of the world, God, Who made the world and everything in it, including you and me, had a PLAN to rescue all the people from the bad things that had come into the world, such as lying, stealing, dying, sickness and hating.

He said to a man named Abraham "Leave your home and go to the country I will show you. I will give you a big family, and do many good things for you, and through you, all the people of the Earth will be blessed." (You can find this in the book of Genesis, at the beginning of the Bible, in chapter 12). To be blessed means to get many very good things, and to be happy forever (no, not just toys and games, for they only can make us happy for a little time).

Now, Abraham went, and had a son there, named Isaac, but Isaac was not himself to be the person who would bless all the people of the Earth. Isaac had a son called Jacob, but he was not the one either. Jacob had 12 sons, and one he loved very much, named, Joseph. 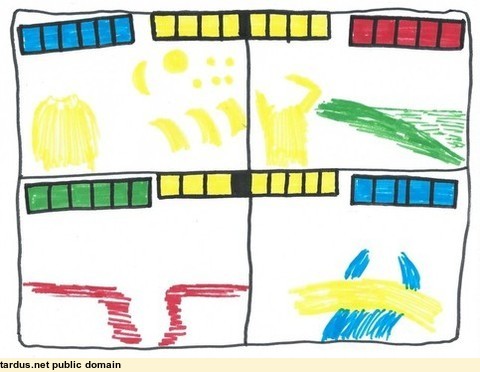 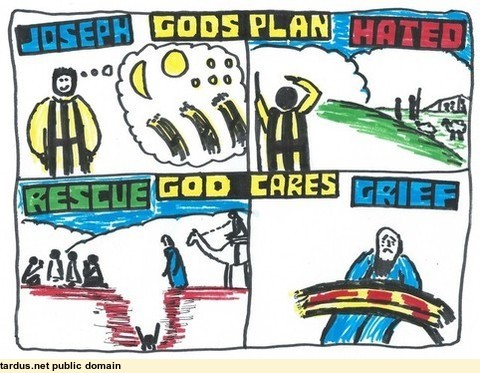 JOSEPH, the son who could be trusted.

Joseph was son number 11 of Jacob's 12 sons. Old father Jacob was not very pleased with his 10 older sons. They did many bad things and he could not trust them to do what was good and right. But Joseph loved God, and wanted to please his father, and always tried to do what was good and right. Jacob trusted him, and knew he would do his work well. He gave Joseph a special and beautiful coat, and gave him the most important jobs to do.

Now Joseph had some dreams. In his first dream he was out in the field with his brothers harvesting the corn. Their bundles of corn (what are called "sheaves") bowed down before his bundle. He told his brothers, and they were not happy - "will we indeed bow down to you?"

He had another dream. This time the sun, the moon and 11 stars all bowed down to him. He told his family. Father Jacob said "will I (the sun) and your mother (the moon) and your brothers (the stars) indeed bow down to you?". His father remembered the dream, and his brothers began to hate Joseph.

HATED by his brothers

One day, the brothers were all away, finding pasture for their flocks of sheep. Father Jacob got worried are they had been gone a long time, and sent Joseph to find them. He looked for days, and then found them at last. When they saw him coming (for they knew his special coat) they said to each other "Here is that dreamer! Let's kill him and say a wild animal has eaten him. That will be the end of his dreams!" They grabbed him, tore of his coat, and were ready to kill him, when Reuben, the eldest brother, said "Don't - let's put him in this old pit here." Then they sat down to have their dinner, and talk over how to kill him. But Reuben planned to come back and rescue Joseph.

Just then, some travelling merchants arrived. Judah, one of the brothers, had a bright idea. "Let's not kill him - let's sell him as a slave." So they sold him to the merchants for 20 pieces of silver, and the merchants took him all the way down to the land of Egypt, to sell him for a good profit there. The brothers and the merchants had their plans, but God uses them to work out His good plan.

GOD CARES, and Joseph is RESCUED

The brothers kill a goat, and dip Joseph's torn coat into the blood. Then they take the coat to their old father Jacob, and lie to him, saying "we found this coat - is it Joseph's? We are afraid he has been eaten by a wild animal."

"My son is dead!" cries old Jacob in his grief (grief is great sadness, as when someone you love has died). God cares for old father Jacob too.

Brother's grief - they were guilty, and they knew it. In their thoughts every day, though they hid it from everybody - living a lie is awful. Numbers 32:23 "You may be sure your sin will find you out." (NIV Bible)

We will find out tomorrow what happens next.