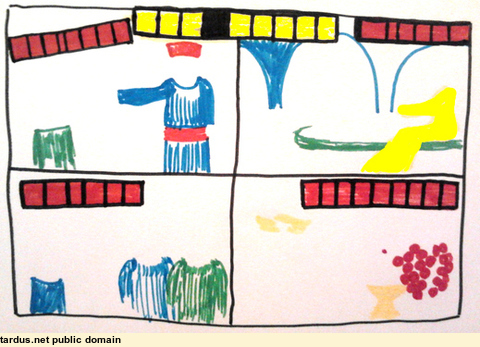 Potiphar was the captain of the guards in Pharaoh's palace, and a very important man.

He found that Joseph was the best possible slave! Because Joseph loved and trusted in God, he wanted to do his best at whatever work he was given to do. Potiphar saw that Joseph was honest, could be trusted, and always did his work well. In fact, God blessed all that Joseph did, and all the work he did in Potiphar's house, his gardens, and his fields, was very good.

Here we see that God was at work, HELP-ing Joseph. Potiphar respects and cares for Joseph, and finally makes him the steward in his house, the one who was trusted with Potiphar's money and managed all the work of his other slaves and servants. Potiphar was very pleased.

Potiphar's wife was not a good woman. In fact, she was very wicked. She likes the look of handsome young Joseph, and when her husband was away, said to him "Come, lie beside me".

Joseph would not go with her. "No! that would be a sin against God as well as my master Potiphar (who trusts me)"

Day after day she says the same thing, then finally, grabs him by his cloak when there is no one else in the house. But he runs away, leaving his cloak in her hands.

Now she hates him, and tells lies to her husband about him. Potiphar believes her, and is very angry now. Joseph is sent to PRISON where "his feet were hurt with fetters, his neck was put in a collar of iron" Ps 105:18.

But though he is in prison, and unfairly, he is the best possible prisoner! He obeys all the orders, and does all his work very well, so as to please God, who he loves and trusts, even in prison, even when things look bad.

God sends HELP again. The chief gaoler, who runs the prison, respects and cares for him, and trusts him with the running of the prison!

More Dreams. The butler (who brought in the food for Pharaoh) and the baker (who prepared the food for Pharaoh) land in prison. Joseph is given the job of taking care of them. (We do not know why they had upset Pharaoh, but perhaps he suspected someone was trying to poison him. That often happened to great kings, as many people were very jealous of them, and wanted to be the king themselves.)

Some dreams worry them - the butler dreams he saw 3 luscious bunches of grapes, and that he squeezed them into Pharaoh's cup, and gave it to him. The baker dreamed he was carrying 3 baskets on his head, and that fine breads and cakes where in the top basket for Pharaoh. But birds came down and ate up all the bread and cakes. Joseph tells them that God can explain dreams. He tells them that

Joseph asks the butler to remember him, and get him out of prison, where he does not belong.

2 more years in prison. Where is the help? "The butler has forgotten me." Has God forgotten too? We shall see, but remember, waiting builds our character, and makes our faith in God strong.

Psalm 46:1 "God is our refuge and strength, an ever-present help in trouble." (NIV Bible)