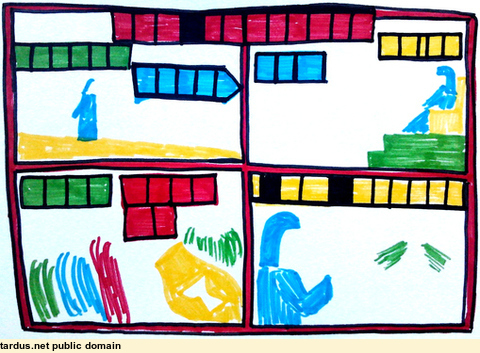 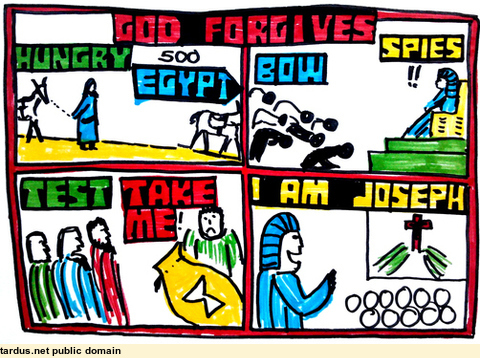 The puzzle pieces are coming together at last - God's great rescue mission is underway.

The 7 good years have gone, and the 7 years of drought begin. Joseph's brothers, and old father Jacob, in the land of Canaan, are getting HUNGRY. The 10 older brothers head for EGYPT to by grain there. It is 500 kilometers, on foot!

10 brothers (without Benjamin, the youngest) BOW before Joseph, not knowing who he really is. Joseph tests them, to see if they have changed, if they are at all sorry for selling him as a slave. "You are all SPIES!" "No, my Lord, we are not spies, we are all brothers. There were 12 of us, but one is dead, and the youngest is at home with our father."

Joseph says "Bring your youngest brother to prove you are telling the truth." Simeon, one of the brothers, is kept as hostage, and 9 return home, with enough food for a while.

Food runs low again; "We can't go back without Benjamin!". Finally, old father Jacob lets them go, with Benjamin. When they get to Egypt, they are very surprised! The Ruler of Egypt (Joseph), second only to Pharaoh, knowing their new-found honesty (over the money he had put back in their sacks of corn, and which they wanted to give back to him) and seeing his younger brother, goes out and weeps, but for joy. He invites them to his house, for a feast, and makes them sit in order of their ages, from the eldest to the youngest; they are amazed - "how does he know this!".

"Whew! That wasn't so bad after all!". But one last TEST - Joseph has his own special silver cup hidden in Benjamin's sack. Then he lets them all have as much corn as they need, and sends them home to Canaan.

They have not got far when Joseph's soldiers catch up with them. "Why have you stolen my master's silver cup?" The brothers say "Not us! If you find the cup with us, we will all be your slaves, and the one with the cup you can kill!" Search is made and the silver cup is found in Benjamin's sack! 10 brothers are horrified, but won't leave Benjamin as they left Joseph 22 years before. They all go back and plead for mercy; they say to Joseph "God has found out the guilt of your servants". Judah, who had earlier said of Joseph "let's sell him as a slave!" now begs to be made a slave himself, "TAKE ME", if only Benjamin can go free. "Let me take the blame!"

Joseph can't stand it any longer. He has seen enough - his brothers are truly sorry for what they had done, and show it by their care for Ben and for Dad. He sends his servants out, and sheds loud tears of joy and relief (the servants hear it). His brothers are changed men. They really are sorry for what they have done. They really do care for their young brother Benjamin, and for old father Jacob, who they had lied to for 22 years.

"I AM JOSEPH!" The 10 are terrified - "what will he do to us?". "Come near to me please", kind words to frightened sinners. "Do not be distressed or angry with yourselves because you sold me here, for God sent me before you to preserve life", Genesis 45:5. "You meant evil against me, but God meant it for good..." Genesis 50:20. They are FORGIVEN.

Better even than a brother's forgiveness is God's forgiveness, won for us by our older brother, the Lord Jesus. Joseph was put in a pit and left for dead, that his family might be rescued from hunger and early death. Jesus was put to death, and defeated death, that we might be rescued from our sin and have eternal (endless) life. Jesus is greater than Joseph, and is the One who has come to RESCUE us, you and me. See Note:

1 John 1:9 "If we confess our sins He is faithful and just and will forgive us our sins and purify us from all unrighteousness."

Judah, the callous brother who said 'let us sell him', here pleads to be ransom for Benjamin. Mighty change! 'For God sent me before you to preserve life' 45:5, '..so it was not you who sent me, but God', 45:8 Brothers all return with Benjamin (though offered amnesty) on finding the cup. Care for Jacob & Benjamin; they were changed men. Self interest was not in their minds. 'Be sure your sin will find you out' - is a two-edged sword, for it can bring forgiveness and healing, as well as judgment.]