Fear and Fear Not!

Here is the Christmas story I told with my sketch-board at a "Carols among the Gum-trees" in December 2016. 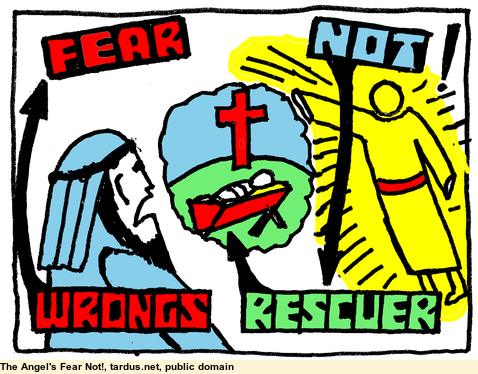 The story begins in the Judean hills near Bethlehem. Some shepherds were sitting at night watching their flocks of sheep. They were not modern shepherds, with quad-bikes and sheepdogs, just poor men who guided the sheep to good grass in the daytime and guarded them at night. It was a dirty, lonely and at times dangerous job, because there were wolves around. Nobody thought much about them, but they just got on with their job.

This night, 2000 years ago, was different. Suddenly a bright light, brighter than the sun, shone around them, even though it was night-time. In the middle of the light was a mighty angel of God, looking straight at them. They were filled with ..... EXCITEMENT? "Wait till I get my camera!". "Wait till I tell the guys about this!". No! not excitement, but FEAR. The Bible tells us they were terrified. Why was this?

To answer, we need to go right back to the beginning, when God made the world, all the animals, and the first man and woman. God used to come every day, in the form of a man, to talk with them in the garden of Eden. That was the happiest time of each happy day. But something happened. God had only given them one rule, to see if they would love and obey Him "just because" He had asked them to.

But something went wrong. They thought they knew better than God, and believed a lie, that they could be like God by not obeying Him. When God come that day to walk and talk with them, they had FEAR for the first time, and tried to hide, but of course they could not hide from Him. He knows everything. Fear has been part of every life ever since.