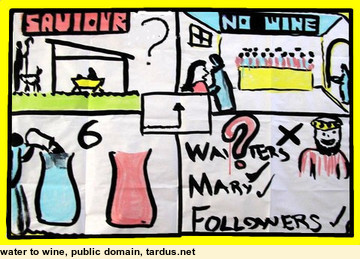 This narrative from the second chapter of John's Gospel tells about the first miracle that Jesus did. Not everyone believes that miracles can ever happen, so a illustration might help. Imagine a chess-board world. None of the chessmen, not even their kings and rulers, have ever seen anything outside the chessboard.

Once a person accepts that the universe, including us, has a Creator, there is no logical barrier to believing in miracles. True, there are many bogus "miracles" around. This no more proves the impossibility of miracles any more than meeting many dishonest men proves there are no honest ones.

God had promised a rescuer, a saviour, a restorer. To the Jews, the descendants of Abraham, Isaac and Jacob (who was also named Israel) this One was known as "Messiah" (literally "anointed one" - One sent by God with power and authority to be the great, long-awaited, Restorer).

"Then the man said, 'This at last is bone of my bones and flesh of my flesh; she shall be called Woman, because she was taken out of Man.' Therefore a man shall leave his father and his mother and hold fast to his wife, and they shall become one flesh." Genesis 2:23,24 ESV (UK)

From Next to Nothing

"Water!" - perhaps they think "the guests have already washed". But they do as they had been told, and filled them up to the brim. This was a huge amount of water, and left no room for any "magic" tricks, such as later pouring in some concentrated, fortified, wine. Jesus did not even touch the water or the pots.

Then Jesus said "Now draw some out and take it to the master of the feast." Here is a real challenge to their obedience. "What will the Master of Ceremonies say?". "We might lose our jobs." But they do it anyway. Good servants these!

The best wine kept till last, or so the MC thinks. The wine is so good he is very surprised. He is used to things being the other way; the longer the feast goes, the worse the supplies get.

Who is this, that plain old water obeys him?

Why the very best wine? - for the same reasons. And we see also that wine is not evil (it also is God's gift); it is drunkenness that leads to evil.

God supplies the best, when our supplies are exhausted.

Heaven reverses the world's practice; "the best is yet to come".

John wrote to show us the signs that point to who Jesus is.

"This, the first of his signs, Jesus did at Cana in Galilee, and manifested his glory."

"And his disciples believed in him." They were sure that He was indeed the Messiah, the Christ, "and that by believing you may have life in his name". Everyone needs to look at this sign, and all the rest in the Gospels, to see if this is true. Nothing else really matters.

Was the the first miracle that Jesus did? This happened after Andrew and Peter, Philip and Nathaniel and one other came to see Jesus in John chapter 1. Yet in Luke's account Jesus performed miracles of healing (Luke 4:31-41) before we hear of him calling his first disciples to follow him (Luke 5). Are these accounts contradictory, as some like to say? Is the Bible unreliable?

I think the answer may lie in two areas:-

"Now there are also many other things that Jesus did. Were every one of them to be written, I suppose that the world itself could not contain the books that would be written." John 21:25 ESV (UK)

2:1 On the third day there was a wedding at Cana in Galilee, and the mother of Jesus was there. 2 Jesus also was invited to the wedding with his disciples. 3 When the wine ran out, the mother of Jesus said to him, "They have no wine." 4 And Jesus said to her, "Woman, what does this have to do with me? My hour has not yet come." 5 His mother said to the servants, "Do whatever he tells you."

6 Now there were six stone water jars there for the Jewish rites of purification, each holding twenty or thirty gallons. 7 Jesus said to the servants, "Fill the jars with water." And they filled them up to the brim. 8 And he said to them, "Now draw some out and take it to the master of the feast." So they took it. 9 When the master of the feast tasted the water now become wine, and did not know where it came from (though the servants who had drawn the water knew), the master of the feast called the bridegroom 10 and said to him, "Everyone serves the good wine first, and when people have drunk freely, then the poor wine. But you have kept the good wine until now." 11 This, the first of his signs, Jesus did at Cana in Galilee, and manifested his glory. And his disciples believed in him.