I set out to tell you about the Tower of Babel, and what it can teach us. However, in a time when there is so much confusion about the early chapters of Genesis, where the story is found, I think it wise to say something about the truthfulness of this whole section of the Bible.

The Old Cavendish Laboratory (for experimental physics) at Cambridge University

The first director was James Maxwell, one of the giants of physics in the 19th century, and called the father of electro-magnetism. Albert Einstein called him the greatest physicist since Isaac Newton. Maxwell saw no conflict between his bible and his science, and had these words inscribed above the door of the then new laboratory -

"Great are the works of the LORD, studied by all who delight in them" Psalm 111:2

Why then are there conflicts?

Perhaps the greatest conflict zone is the first 11 chapters of the (BTW, the chapters are later conveniences added by editors, and have no meaning as such). This is the part that begins with the creation and ends with the birth of Abraham. The battle cries are "Its all literal!" on one side, and "Its myth and legend!" on the other. Most accept that we have true history from Abraham onwards.

Why should we care?

Either it is true that Someone created the cosmos, including mankind, or it just happened. If God made all, then there is a true foundation for meaning, grounded in the character of God. If we just happened, if we are just cosmic accidents, the result of the random collisions of atoms, then we have no foundation for any of the things we all cherish - love, beauty, right and justice. These are all just chemistry in action. We know nothing about why we are here, why man is man, and why we ought to behave in any acceptable way. We have no basis for saying that even paedophilia is evil behaviour. What is is, and might is right! Even eastern Pantheism (ie, "the cosmos is God, so you are also God") cannot help, for one man's "god-ness" is shown in cruelty and another's in charity, and who is to say that one is evil and the other good?

Some clues to the nature of Genesis 1-11

The Creation of the World

1 In the beginning, God created the heavens and the earth. 2 The earth was without form and void, and darkness was over the face of the deep. And the Spirit of God was hovering over the face of the waters. 3 And God said, “Let there be light”, and there was light. 4 And God saw that the light was good. And God separated the light from the darkness. 5 God called the light Day, and the darkness he called Night. And there was evening and there was morning, the first day. The Holy Bible, English Standard Version Copyright © 2001 by Crossway Bibles, a division of Good News Publishers.

What about poor science?

The Genesis Account of the Tower of Babel - Genesis 11:1-9 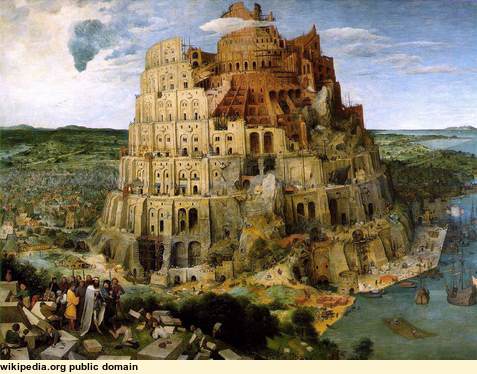 What does this teach us about Man?

What does this teach us about God?