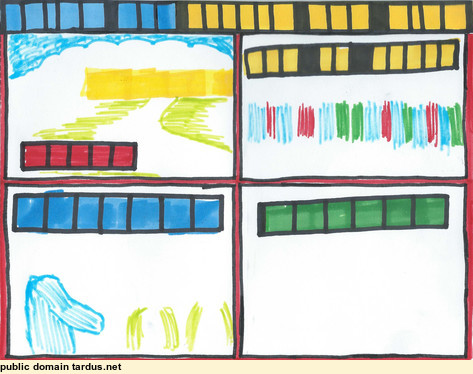 The baby that the Wise Men travelled so far to worship as their King did not stay as a baby. JESUS grew into manhood, and when he was 30 years old he left his job as a carpenter. Instead he went about teaching the people about the kingdom of God, and doing good things.

He healed the sick, even healing blind people, who could not see, with a word, or with a touch of his hand, just as God's prophet Isaiah had said, 700 years earlier.

Then the eyes of the blind shall be opened, and the ears of the deaf unstopped; then shall the lame man leap as a deer, and the tongue of the mute sing for joy. Isaiah 35:5, ESV Bible

One day he was leaving the city of Jericho, called the city of palm trees because it was on the flat and good land near the Jordan River. 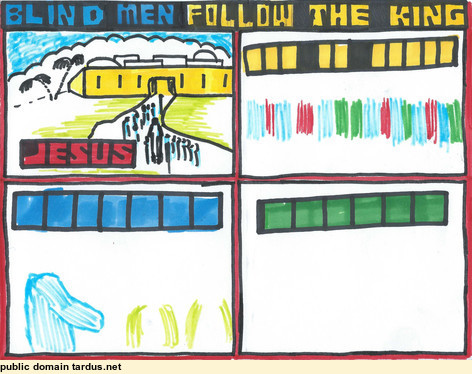 A huge crowd had gathered together to hear him, and maybe see one of Jesus' miracles of healing. There were so many people you could hardly move.

There were two blind men, who lived all their days in darkness. They were sitting by the roadside, begging for a little money from anyone who passed by.

Their ears were good though, and they heard the sound of the crowd coming closer. When they heard that it was Jesus the great teacher and healer who was coming, they began to shout out as loudly as they could "Lord, SON OF DAVID, have pity on us!". Though the eyes in their heads could not see, they believed that Jesus was God's promised King, while many did not, but were just curious. They "saw" with the eyes of faith, which is better than seeing Him walking out of Jericho.

The crowd yelled at them - "Shut up! We want to hear Jesus. He's much too important to be worried by beggars like you."

But they had heard about Jesus. People were calling him the Son of David, the one God had promised to send, to be the true King. So the kept on shouting very loudly "Lord, SON OF DAVID, have pity on us!" 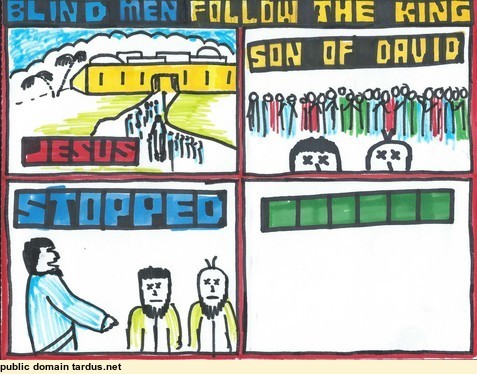 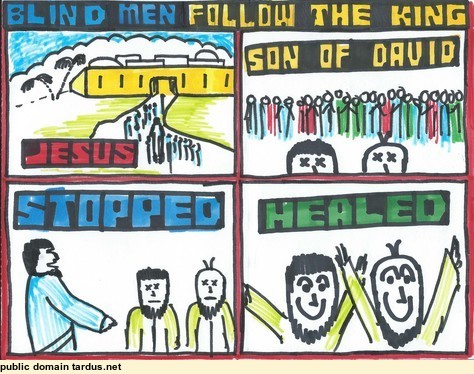 Immediately they can see! They now shout for joy, telling everyone how great God is, to send His Son, the true King that was promised long ago. They FOLLOW Him from that day onwards.

The crowd goes wild, praising God. "We have never seen anything like this!"

Only God's true King, Jesus, Son of David and Son of God, can do such wonders as this. He can do much more - He came to rescue us from all the wrong things in our hearts, that is, to forgive our sins, and make us perfect at last. He came to give us a home with Him in heaven, where all is peace and joy and delight.

Click here for a download-able PDF copy - or go to the web-site https://tardus.net, click on "Story", then "KnightsOfTheKing"