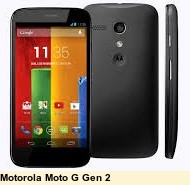 Buying a high end smartphone outright can be a very expensive step. When my Samsung Galaxy S2 failed (from very rapid battery drain with a very high case temperature) I looked around for a replacement. Having heard of Motorola's relatively cheap Moto E and G phones I checked on eBay to see what they go for, and discovered there was now a 2nd generation Moto G. With a 20% off special for selected vendors there was one going for about $A210 (Australian). That seemed remarkable, so I checked reviews and specs and was impressed:-

I ordered it and could not be happier. I've had it about 3 months now. Here is a summary of my experience.

All up I reckon this must be the bargain phone of the year.