The Gathering Storm, Who Shall Stand?

Those of you who know Tolkien's great saga, "The Lord of the Rings" will instantly recognise this, but if not let me paint you a scene - The Captains of the west, lead by Aragorn, the uncrowned king, are at the terrible Black Gate into Mordor, and utterly outnumbered by the armies of Sauron, the Dark Lord. There seems no hope. "Who shall stand?"

Suddenly Mt Doom explodes into fire and fury! Sauron's mighty Ring of Power has been destroyed at last, and Sauron withers as it melts inside Mt Doom. His cruel citadel of Baradur, the Dark Tower, collapses, battlement by battlement, into utter ruin, and all Mordor is convulsed by titanic earthquakes and landslides. Sam and Frodo are in the middle of it all, close to death on the flanks of Mt Doom. There seems no hope. "Who shall stand?"

Chapters 4 and 5 are in the control room of the Universe. God, Ruler/Creator and Ruler/Redeemer; the Lamb is on the throne. Top-secret book of destiny (7 seals) and no one but the LAMB (Jesus, John 1:29) can open it.

Chapter 6 is the Beginning of a Brief History of the World. The Book of Destiny (the symbol that is) slips away, and the 7 seals take centre stage. Proud conquest, war, want and death. Christian martyrs beneath throne, longing for justice and resurrection. 6th seal brings the end of the world. Sun, moon, stars, sky wither and die. Mountains heave and collapse. Men try to hide from Jesus' face as He comes to judge. They cry out "Fall on us" to the mountains and rocks. Then comes the great question, the greatest of questions! 6:17 "Who shall stand?"

This chapter seems at first a surprising - we naturally expect the final and 7th seal to be broken and the book of destiny to be revealed, but instead we have a kind of gap, an interlude, and new symbols are introduced. Judgement and ruin hang on a knife edge. 4 angels are ready to release the winds of destruction (see v2 and 3, these are not gentle breezes, but to do harm), but another angel flies out of the rising sun crying aloud "Wait!" He has God's great seal, and must first mark God's people.

7:1 After this I saw four angels standing at the four corners of the earth, holding back the four winds of the earth, that no wind might blow on earth or sea or against any tree. 2 Then I saw another angel ascending from the rising of the sun, with the seal of the living God, and he called with a loud voice to the four angels who had been given power to harm earth and sea, 3 saying, “Do not harm the earth or the sea or the trees, until we have sealed the servants[a] of our God on their foreheads.” 4 And I heard the number of the sealed, 144,000, sealed from every tribe of the sons of Israel: 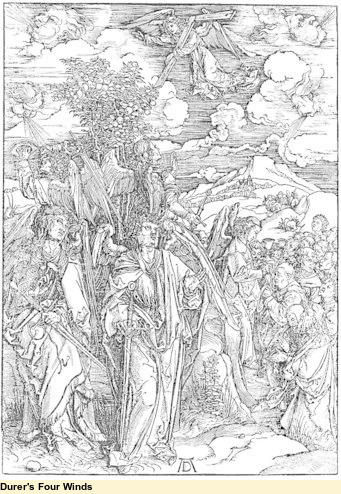 A king's goods were secured and sealed with wet clay, stamped with his seal, and woe to any who broke the clay with the seal's stamp on it. Here the seal is not a literal seal, for a mark on your forehead will soon fade, but the life of Jesus in your soul can never fade away. 2 Timothy 2:19 "But God's firm foundation stands, having this SEAL: 'The Lord knows those who are His'" John 10:27 "My sheep hear my voice, and I know them, and they follow me..." Ephesians 1:13-14 "In Him...you were sealed with the promised Holy Spirit, who is the guarantee of our inheritance..." This seal says "I belong to King Jesus, and I obey Him, and He looks after me."

Here we are told of the 12 tribes of Israel (that is, of Jacob, who's other name was Israel), and only 12,000 people from each tribe. Is this literal? Are there really just 144,000 who are known and saved by Christ, sealed by His Holy Spirit? Some, such as the Jehovah's Witnesses, think so, and that only 144,000 go to heaven (and yes, they are all Jehovah's Witnesses - they do not think 144,000 are literal Jews, actual descendants of Jacob). Now I hope you are asking yourself "Ah, but it is surely a symbol, and what does this symbol mean?". In case you have doubts, consider that the list of names given here is not in fact that of the literal 12 tribes of Israel, the descendants of the 12 sons of Jacob. The tribe of Dan and the half-tribe of Ephraim are missing, while Manasseh is added. The list given in chapter 7 is not the 12 by birth (see Genesis 35:23-26), for Manasseh and Ephraim were Joseph's sons, not Jacob's; nor is it by division of the land when Israel settled in Canaan, for Levi had no province/share, being set apart by God as the priestly tribe, and to be maintained by the other 11 tribes. Exactly what do these differences mean? I'm not sure, but it is a strong hint that this is one more symbol!

12 is number of completeness; so 12 times 12 is fully completed/fulfilled; 12 x 12 x 1000 represents a huge number. and God knows everyone of them. It is a definite number, that God knows (and we dont)

"Come you who are blessed by my Father, inherit the kingdom prepared for you from the foundation of the world" Matthew 25:34 (also Ephesians 1:4).

Where else to we find 12s in this book?

Have you trusted in Jesus "I bet all I have on Jesus, I will throw myself on Him, the One Who died a real death for real sin (from Colin Buchanan's song "Real Hope"). If not, why not? Don't put it off! The world hangs on a knife's edge - tomorrow may not come on this old, scarred, dying Earth.

Durer's famous old woodcut (above) shows a grim time, but he misses the point I think. Yes, judgement has come, but endless joy for Jesus' own people. Durer's "saints" don't look as happy as the next part shows us the will be. (Or perhaps he shows us some who expected to get the seal, and were passed over - Matthew 7 and Matthew 25 warn us of this very thing).

Next, a numberless number!

Well, at least a number that no one can count.

9 After this I looked, and behold, a great multitude that no one could number, from every nation, from all tribes and peoples and languages, standing before the throne and before the Lamb, clothed in white robes, with palm branches in their hands, 10 and crying out with a loud voice, “Salvation belongs to our God who sits on the throne, and to the Lamb!” 11 And all the angels were standing round the throne and round the elders and the four living creatures, and they fell on their faces before the throne and worshipped God, 12 saying, “Amen! Blessing and glory and wisdom and thanksgiving and honour and power and might be to our God for ever and ever! Amen.” - Revelation 7:9-12 ESV

NOTE: every nation, tribe and tongue, not just Jewish folk!

In white robes (another symbol, of those freed from sin's guilt and rule), blessing God and the Lamb "Salvation belongs to our God Who sits on the throne, and to the Lamb!"

See what happens - a repeat of chapter 5:9,10 where all creation explodes into praise! - 4 cherubim and 24 elders fall down in awe and wonder and adoration of God at the sight of this vast crowd of Jesus blood-bought people, saying "Amen! Blessing and Glory and Wisdom, and Honour and Power and Might be to our God forever and ever!". It is all one.

13 Then one of the elders addressed me, saying, “Who are these, clothed in white robes, and from where have they come?” 14 I said to him, “Sir, you know.” And he said to me, “These are the ones coming out of the great tribulation. They have washed their robes and made them white in the blood of the Lamb.

John is asked "who are these (in white robes)?" and then given answer; "they have washed their robes and made them white in the blood of the Lamb." Jesus has saved them, Jesus has died for them, Jesus cares for them! See verses 15,16 and 17.

15 “Therefore they are before the throne of God,

and serve him day and night in his temple; and he who sits on the throne will shelter them with his presence. 16 They shall hunger no more, neither thirst any more; the sun shall not strike them, nor any scorching heat. 17 For the Lamb in the midst of the throne will be their shepherd, and he will guide them to springs of living water, and God will wipe away every tear from their eyes.” He shelters them, feeds them, comforts them, blesses them, forever.

14 I said to him, “Sir, you know.” And he said to me, “These are the ones coming out of the great tribulation.

6 And you will hear of wars and rumours of wars. See that you are not alarmed, for this must take place, but the end is not yet. 7 For nation will rise against nation, and kingdom against kingdom, and there will be famines and earthquakes in various places. 8 All these are but the beginning of the birth pains. 9 “Then they will deliver you up to tribulation and put you to death, and you will be hated by all nations for my name's sake."

21 For then there will be great tribulation, such as has not been from the beginning of the world until now, no, and never will be. 22 And if those days had not been cut short, no human being would be saved. But for the sake of the elect those days will be cut short.

29 “Immediately after the tribulation of those days the sun will be darkened, and the moon will not give its light, and the stars will fall from heaven, and the powers of the heavens will be shaken. 30 Then will appear in heaven the sign of the Son of Man, and then all the tribes of the earth will mourn, and they will see the Son of Man coming on the clouds of heaven with power and great glory. 31 And he will send out his angels with a loud trumpet call, and they will gather his elect from the four winds, from one end of heaven to the other.

51 Behold! I tell you a mystery. We shall not all sleep, but we shall all be changed, 52 in a moment, in the twinkling of an eye, at the last trumpet. For the trumpet will sound, and the dead will be raised imperishable, and we shall be changed.

15 For this we declare to you by a word from the Lord,[a] that we who are alive, who are left until the coming of the Lord, will not precede those who have fallen asleep. 16 For the Lord himself will descend from heaven with a cry of command, with the voice of an archangel, and with the sound of the trumpet of God. And the dead in Christ will rise first. 17 Then we who are alive, who are left, will be caught up together with them in the clouds to meet the Lord in the air, and so we will always be with the Lord.

18 Therefore encourage one another with these words. 1 Thessalonians 4:18

Click here for the next Revelation article Revelation Chapters 8 to 11, "The Trumpet of The Lord" (the 2nd Short History of the World)