Before I retired I worked for over 30 years in the oil refining industry. A friend asked me to give a talk about oil at a men's shed night in a farming community, so here is "The Good Oil" (his title suggestion, not mine, though I think it a very good one. In Australian slang "the good oil" is something that is reliable, or true, something that delivers on its promise). As the aim is for a quick yet interesting overview, with a time suggestion of about 15 minutes, this is of course not in any way comprehensive, but I hope it is useful. I will of necessity break two cardinal principles:-

When? (History of Oil) 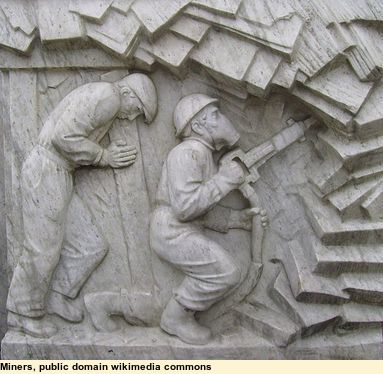 Mining goes back a long way, and getting crude oil is part of mining. The oldest book in the Bible, that of Job, speaks of mining as thoroughly well established in ancient days, as does later archaeology.

"Surely there is a mine for silver,
and a place for gold that they refine.
Iron is taken out of the earth,
and copper is smelted from the ore.
Man puts an end to darkness
and searches out to the farthest limit
the ore in gloom and deep darkness.
He opens shafts in a valley away from where anyone lives;
they are forgotten by travelers;
they hang in the air, far away from mankind; they swing to and fro.
As for the earth, out of it comes bread,
but underneath it is turned up as by fire.
Its stones are the place of sapphires,
and it has dust of gold."
The Bible, Job chapter 28 (English Standard Version)

The name Petroleum is from the Greek for "rock oil".

The majority scientific theory is that petroleum, including crude oil, is the result of vast beds of tiny sea plants and animals (plankton) being laid down and buried before they could rot. Time plus pressure plus heat converted the organic stuff into bitumen, crude oil and natural gas. Reference 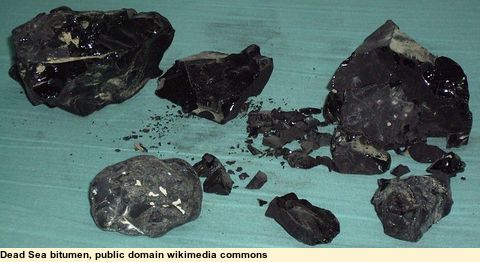 It was an essential building material and medicinal base in ancient Sumeria, "the land between the rivers", now modern Iraq. Its use in the great city of Babylon was extensive, being mixed with sand as a long lasting mortar, and for road making and damp-proofing of buildings, eg, the Hanging Gardens and the Tower of Babel (just as the Bible recorded long before modern archaeology unearthed the fabled ruins; Genesis chapter 11, "And they had brick for stone, and bitumen for mortar."). Bitumen was highly prized, but the ancients did not have much use for the flammable and difficult to handle lighter oils. [https://archive.aramcoworld.com/issue/198406/bitumen.-.a.history.htm]

Wars were fought over access to this black bitumen treasure.

In the centuries just before the birth of Jesus the Christ, wars were fought over access to this precious resource, between the Nabateans, who owned the Dead Sea with its very productive bitumen springs, and the Egyptians, who used it for the mummification of the dead and in medicine. The Macedonians (Alexander the Great's empire) and later the Romans fought over it too. Bitumen Wars

I remember a book on the history of oil in the library of the oil refinery I worked at. There I saw a photo of a pool in unearthed Babylon, with its thick bitumen damp-course still intact and still good, after 2,500 years! My last job as a mechanical engineer was the design of a blast-resistant bunker to hold new computerised control systems. The site was flat and sandy, with the water table close to the surface, and the idea of a thin film of black builder's plastic as a damp-course for this mass of reinforced concrete didn't make much sense - it would have been punctured many times during construction. It was then I remembered old Babylon, and we got the building contractor to compact the surface and lay 50mm (2 inches) of a bitumen and fine "blue-metal" aggregate, rolled smooth. The whole structure, with its 400mm (16 inch) thick walls, floor and roof, and its forests of 25mm (1 inch) steel reinforcing bars, was built on top of the bitumen. 25 years later and it is still OK (I hope! It was when I retired 3 years ago). 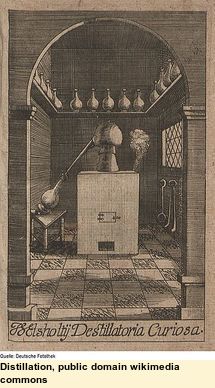 Uses for petroleum were few in the Western World until a shortage of whale oil for lighting sparked some interest.

The first known engine-driven oil drilling rig is thought to be Drake's Well, built in 1859 at Titusville, Pennsylvania. I visited the well in 1978, in a very bitter winter, with snow drifting over the roads. I then worked for a company making underground coal mining machines, and well-remember the vast factory, heated (over much for me) by dozens of big air heaters. I never checked, but they were almost certainly powered by oil. 40-ton mining machines stood outside under drifts of snow, waiting for shipment. 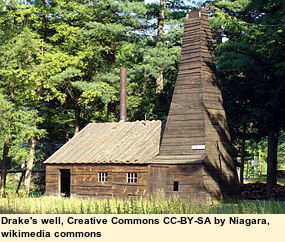 Here in Australia the first oil refining efforts were for the extraction of oil from shale_, at Newnes and at the Glen Davis Refinery near Lithgow in NSW.

Glen Davis began production as a strategic necessity in the early years of World War 2, but the industry was never profitable, and died out by the 1950s with the cheap and readily available crude oil being discovered in large areas of the world.

Why? (Its importance today)

The rise of the internal combustion engine and cheap energy.

The cheap, but dirty and heavy, energy of the coal-fired steam engine brought in the Industrial Revolution, like it or not. Coal still provides most of the world's energy, from the coal-fired, now clean and efficient, monster power-stations.

But coal did not answer the need for cheap and simple portable energy for the mass of people. Cheap and readily available energy is what makes our advanced economies tick, freeing us from the limitations of animal power. How many farmers still use horses or oxen to pull their ploughs. We look back romantically to a world without petrol, cars, aircraft and plastics, but not many of us want to live there, and even fewer of us try the experiment.

It was the rise of oil distillation for lighting kerosene, and the parallel development of the petrol engine, and later the diesel, that ushered in a second industrial age. It is not for nothing that we do NOT drive electric cars. The energy density of even the best batteries is no match for the energy stored in a small tank of petrol or diesel fuel. The batteries just end up huge, heavy , short range and too expensive.

"Cheap! What's this about cheap?"

Perhaps you are thinking "This guy doesn't have to pay my monthly diesel bill." and of course you are right, I don't. But the cost is in the large amount we all use and expect to use. Because it's cheap and so useful the whole world uses as much as it can afford. Supermarket wars aside, petrol and diesel are cheaper per litre than milk, Coca-Cola and bottled water, and milk, etc. don't have a heavy excise tax. The only thing that beats it is tap water.

The world (me included) is addicted to cheap and portable energy.

How many internal combustion engines do you have on your farm? Tractor, harvester, ute, car, quadbike, trailbike, mower, trimmer, chainsaw, pump, generator. Nothing wrong with any of these of course, but it does illustrate how much we depend on them. I read of a very early motorist who carefully tracked his car costs, including "a boy to wash it", and found it much cheaper than keeping horse and carriage, and less pollution too!

On top of that there are the plastics, including all the synthetic fabrics. Have a look around your home, and in your pockets, for all the plastic and high tech stuff. It all comes from crude oil.

How? (How do we make petrol and diesel?)

At the refinery where I worked we had a glossy booklet we gave out to visitors and tour groups, called Boiling the Oil. That pretty well sums it up (though of course the overall process is a lot more complicated).

It goes back to that Arab invention called distillation. Crude oil is a brew of many different things, from heavy lube oils and bitumen, light oils like kerosene and diesel, volatile liquids like naphtha and straight-run gasoline (the basis for petrol) and dissolved gases, like butane and propane (LPG). They all have different boiling points. In principle, if you heat a pot of crude, the first things that boil off (at a low temperature) are the gases, then as the temperature rises, the naphthas, then the diesel, with the heavy stuff left behind (that is another story). 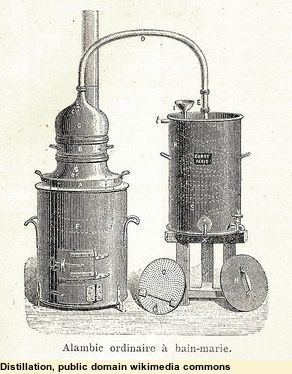 Actual production is a continuous process, not boiling up batches of crude, but the principle is the same. Crude is heated, then pumped into a vertical distillation tower (typically 50 metres high, or 160 feet) with some cunning internal structures to collect the various liquids. The bottom of the tower is kept hot, with the temperature dropping uniformly towards the cooler top. The gases are too light to condense back to liquid, and are taken off at the top. The heavy stuff left at the bottom is pumped out for further processing, essentially being broken down into lighter liquids and then distilled again. 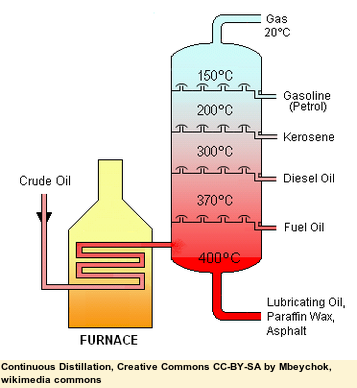 Modern refineries are very efficient, turning about 96% of the crude into useful products (the rest goes to fuel the many refinery furnaces, for heating oil and making steam). 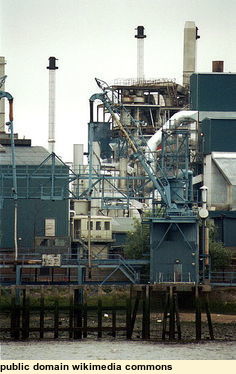 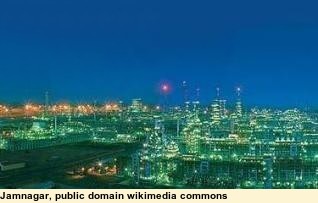 Love it: we can't leave it

Some loath oil and all it represents, but there is no turning the clock back. Anyway, the problems of the world are not because of oil (or anything else mined from the ground) but because of what is in the hearts of men. Nevertheless, oil remains a gift of God, and so is a good gift. Our job is to use it wisely in our lifetimes, and to leave a better legacy for our children.

Click here for a downloadable PDF copy or visit tardus.net, and select Science from the menu. Then scroll to "The Good Oil".